Using the JupyterLab plugin for Python

In this article, you'll learn how to access all the features the JupyterLab plugin has to offer for Python.

Note: If you installed the JupyterLab plugin while JupyterLab was already running, you'll need to restart JupyterLab for the plugin to activate.

If Kite is installed properly, you should see a small Kite logo at the bottom left corner of the JupyterLab window.

If Kite is not installed, you'll need to download and install it first. If Kite is installed but not running, please start the Kite Engine before continuing with the rest of this guide.

To start, open a Python notebook. Make sure that this file has been saved with a .ipynb extension. Now type the following code:

💡 Tip: You can toggle the completions documentation panel on/off with the command Kite: Toggle Docs Panel in JupyterLab's command palette. 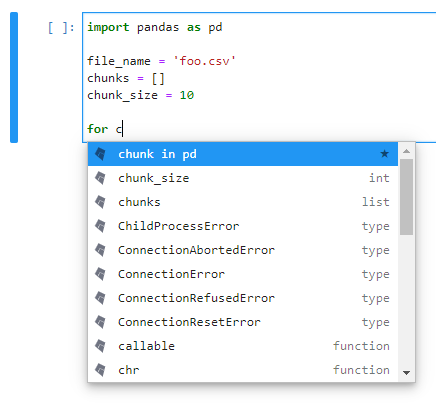 Kite can also quickly retrieve documentation for the code you are working with. If you have enabled "docs are following cursor" in the Copilot, then the Copilot will automatically update with the documentation of the identifier underneath your cursor.

The JupyterLab plugin provides a number of commands for ease of use. To access them, open JupyterLab's command palette, and search for "Kite:". The commands provided are: