Using the JetBrains plugin for Python

In this article, you'll learn how to access all the features the JetBrains plugin has to offer for Python.

For Python developers, the JetBrains plugin works for both PyCharm and IntelliJ. From here on, we will assume that you are using PyCharm.

Note: If you installed the PyCharm plugin while PyCharm was already running, you'll need to restart PyCharm for the plugin to activate.

If Kite is installed properly, you should see a small Kite logo at the bottom right corner of the PyCharm window. Clicking this icon opens a menu that will tell you the current status of Kite.

Note: If you're running Kite for the first time, it may take several minutes for Kite to finish syncing and indexing your codebase. 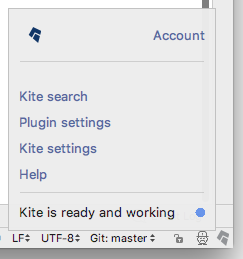 The menu that appears when clicking the icon will also allow you to access your settings.

To start, open a Python file in a whitelisted directory. Make sure that this file has been saved with a .py extension. Now type the following code:

In the case of name and attribute completions, Kite will also provide the type of value represented by the completion e.g. module or function. 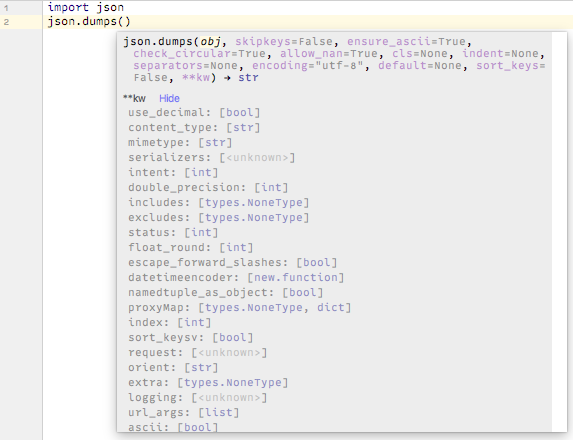 The “How others used this” section in the bottom half of the UI shows you common ways other programmers use the function json.dumps. Kite learns these calling patterns by analyzing all the open source code available on GitHub and then ranks them from most popular to least popular. If you are calling a function that you have defined locally, Kite will extract patterns from your codebase directly instead of GitHub.

If you have upgraded to Kite Pro, Kite may suggest completions that can complete multiple words at once. For example, Kite can provide snippets for calling functions. When a snippet is selected, you will be able to cycle through the arguments with the tab key and make the necessary changes.

Kite can also suggest completions for generic code structure, such as control structures and variable assignments, to name a few.

Kite can also quickly retrieve documentation for the code you are working with. You can do so by positioning your cursor over an identifier and selecting the Kite: Docs at Cursor action from the action navigator.

When triggered, the documentation shows up in the Copilot.

Kite comes with several actions that you can run.